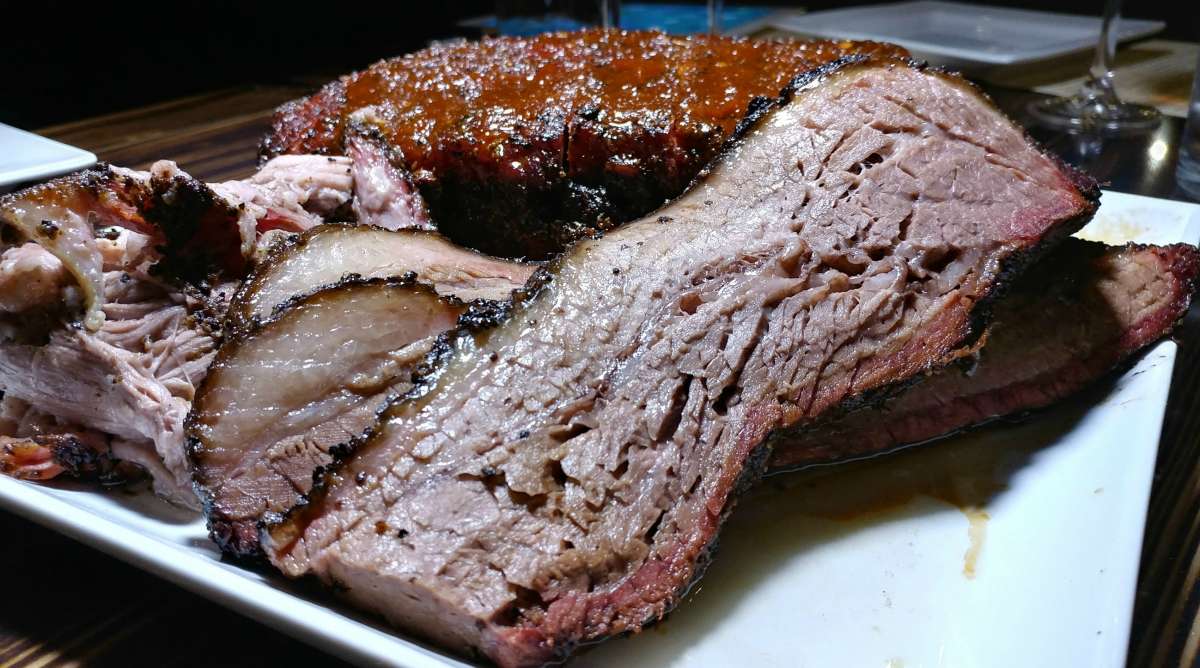 Paul Keeler, of Market Street Kitchen deliciousness, has done it again with his latest dining concept, Liberty Station American Tavern and Smokehouse. Patrons of the new north Scottsdale eatery will find the same outstanding service, food and standards that have made MSK a Scottsdale mainstay, but Liberty Station has a smokey twist!

That’s right – smokey! As in smoked meats and killer BBQ. They’ve added a custom made Camelback smoker to the establishment and it’s prominently located on the back patio, enticing and beckoning folks from all around the area with the delicious aroma.

I recently had the opportunity to visit and try some of the menu staples and I was delighted by the variety and range of options. You’ll find everything from east coast favorites, like velvety New England Clam Chowder to Texas classics like smoked brisket with all the fixin’s.

Now let’s talk a little bit about that clam chowder. I’m not usually the biggest fan of the thick soup, I find it often too pasty and lacking in it’s namesake shellfish. But Executive Chef Michael Hunn and Chef de Cuisine, Dan Watts have nailed it! The consistently is rich and luxurious, hearty and thickened by reducing the cream. There is a prominent bacon taste that compliments the sweet, briny, tender clams that are abundant in the chowder. It was excellent!

Seafood lovers will also be delighted with the Drunken Pei Mussels served with crusty baguette to sop up the incredible broth. The mussels were sweet, meaty and tender and Liberty Station added its signature taste by adding chunks of smoked pork to the mix. It was surf and turf greatness!

I was also wildly impressed with the Boston Cod Fish and Chips. The portion was huge!! A thickly battered piece of expertly cooked flaky whitefish came atop a mountain of perfectly crisped fries. The malt tarter sauce was the perfect accompaniment.

The Braised Short Ribs with Mushroom Risotto and Porcini Cream Sauce was one of my favorite menu items. The short ribs were fork tender and practically melted in your mouth. The creamy risotto was just right, rich with a earthy taste from the mushrooms.

But the real stars of Liberty Station are the smoked specialties, Texas Brisket, Carolina Pork Shoulder, St. Louis Spare Ribs and Chicken. Nothing beats the tenderness and taste of perfectly smoked meats. The process is low and slow and well worth the effort. Meals from the smoker include a choice of two side including, honey butter cornbread, coleslaw, Boston baked beans, sweet potato fries, mac & cheese and more!

Every great eatery needs great cocktails and Liberty Station’s get ’em, courtesy of Garrit Guthrie, director of mixology. You’ll find spirit forward, classic cocktails, local brews and a wide array of wine. Be sure to try the “Falernum, Damn Near Killed ‘Em!” a tropical cocktail with herby notes made with Hamilton 151 Rum, Falernum, Pamplemousse, bitters, and lime. Another favorite of the night was the light and fresh Desert Rosé made Tito’s Vodka, Lillet Rose and lemon.

The above is just a smattering of the deliciousness found at the new Liberty Station American Tavern and Smokehouse. Stop by and check it out for yourself, I promise your mouth will be watering before you even make it through the door.

Disclaimer: I was invited to a media dinner to experience Liberty Station free of charge. All opinions within this post are entirely my own.