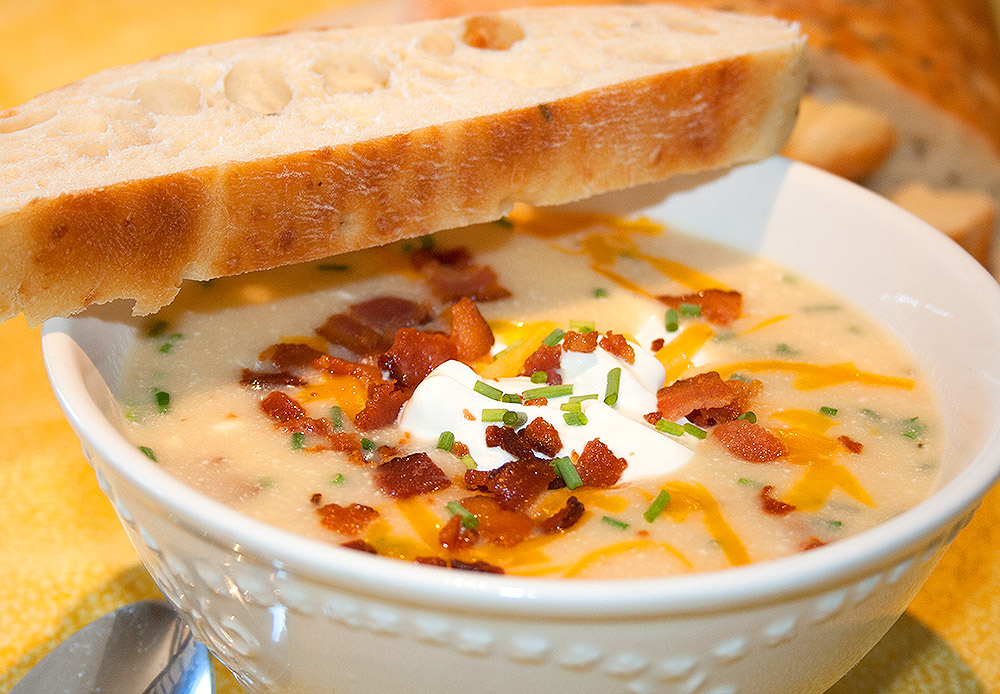 Phoenix days are still warm and sunny this time of year but the evening chill makes me crave a bowl of hot, steaming soup. I’m a soup fiend. So is Jax. Almost every time we eat out I order a cup of soup for her as her meal. It doesn’t matter the kind – she loves it all – noodle soups, veggie soups, creamy soups, cheesy soups – she’ll slurp it with gusto!

But her favorite of all is her mommy’s baked potato soup loaded with all the fixin’s. It’s so yummy and easy to boot.

Wash, peel and cut those taters in chunks. They don’t have to be pretty because they’re getting pureed anyway, but they should be about the same size so they cook evenly.

Add the tater chunks to a pot of the chicken broth, along with the onion and bay leaf. Boil on medium heat for about 25 minutes or until the potatoes are super soft.

While those taters are a-boilin’, cut the bacon up into small pieces and fry it up crisp!

Place the cooked bacon on a paper towel lined plate to soak up the excess grease.

Once the potatoes are soft, you’re ready to puree them in to oblivion. I use an immersion blender for this but if you don’t have one a food processor will do. Or simply mash them up in the broth with a potato masher – if you go that route you will have a nice chunky texture. Be very careful not to get splashed because it’s boiling hot and will cause injury. Ouch! My husband can attest to this – he bears a small burn scar on his arm from a potato soup splash. I told him to be careful with that immersion blender. Did he listen? NOPE! (Tangent over.)

Add the sour cream and whisk briskly to blend.

Add cheese, small bits at a time. Whisk between additions to incorporate. If you add the cheese all at once it will clump into a melty, cheese ball and you don’t want that.

Snip, snip, snip the chives directly into the soup and stir it all together. You can also just chop the chives with a knife but kitchen shears make the job so easy!

Looks fantastic, right? Good enough to eat. You will love it. We certainly do. Especially Miss Jax. Check out the photos after the recipe to see how much she  loved this super easy, super awesome soup!

Soup this good should be worn…on the face and the clothes.

She insisted on feeding herself. We’re still mastering the spoon.

Told ya, she liked it. Every last drop of it.

Now go make this soup. Now! You’ll thank me for it.