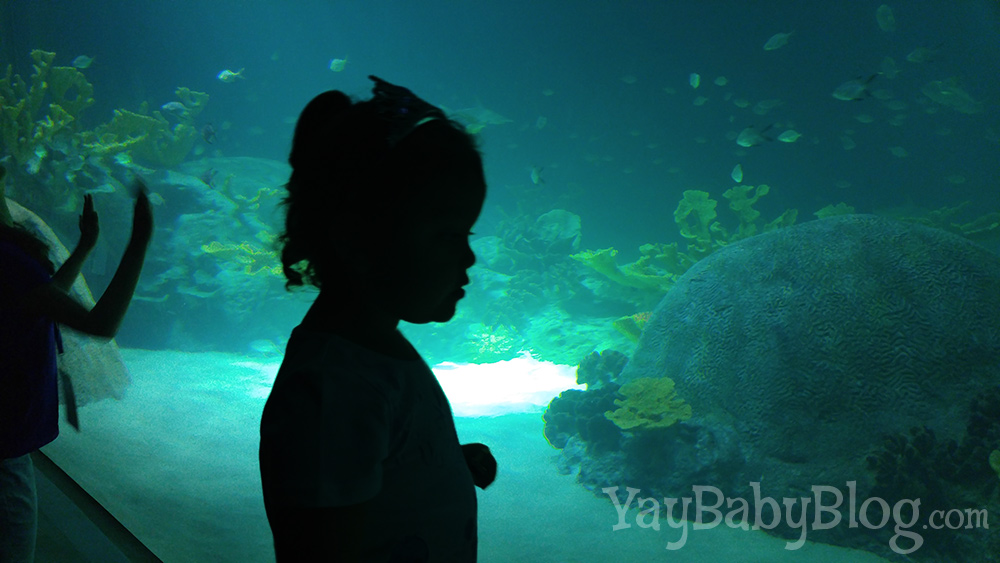 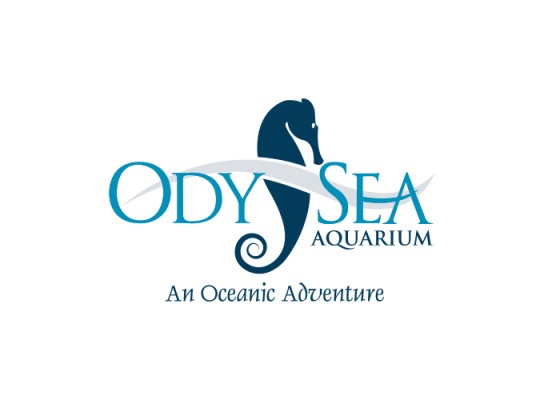 It’s here! It’s finally opened! After what seemed like ages, The OdySea Aquarium opened it’s doors to the public a few weeks ago. It’s a massive, awe-inspiring complex, home to a variety of marine animals splashing and swimming around in 2 million gallons of water. OdySea is located at The Salt River Pima-Maricopa Indian Community and is the largest aquarium in the southwestern United States.

Over the past year, drive-by’s past the site would turn up excited squeals of anticipation as I pointed out the progress to Jax, my four year-old daughter.

“Mama, can we go inside,” my wide-eyed girl would ask with hope in her voice. “Can we please go see the fishes?”

A few weeks ago I could finally say yes to her pleas!

We prepped for a few days prior to our visit; watching “Finding Nemo” and “Octonauts,” raising Jacquelyn’s excitement and piquing her interest. Then the day arrived. I dressed my little mermaid in her sea-inspired best and we set off. Driving up to the complex, I heard her breath catch. OdySea is pretty massive and it dwarfs the adjacent Butterfly Wonderland in sheer size. She knew she was in for an adventure.

When you first walk in, make sure you look up. Giant orbs are suspended from the ceiling, filled with schools of fish. Each orb weighs an impressive 1,000 lbs. and the entire display is pretty awesome. A stop in the lobby bathroom is also a must! Instead of mirrors at the sink, guests are dazzled with a front row seat looking into the shark habitat, 200,000 gallons of water  with eight different species of sharks swimming around. Jax was mesmerized, and we spent a good 20 minutes in the bathroom, her perched up on the counter gazing at the gracefulness of those mysterious sea creatures. Between the ceiling orbs of fish and the sharks in the bathroom it was pretty difficult getting my pre-schooler out of the lobby area, trying to convince her there was so much more to see. 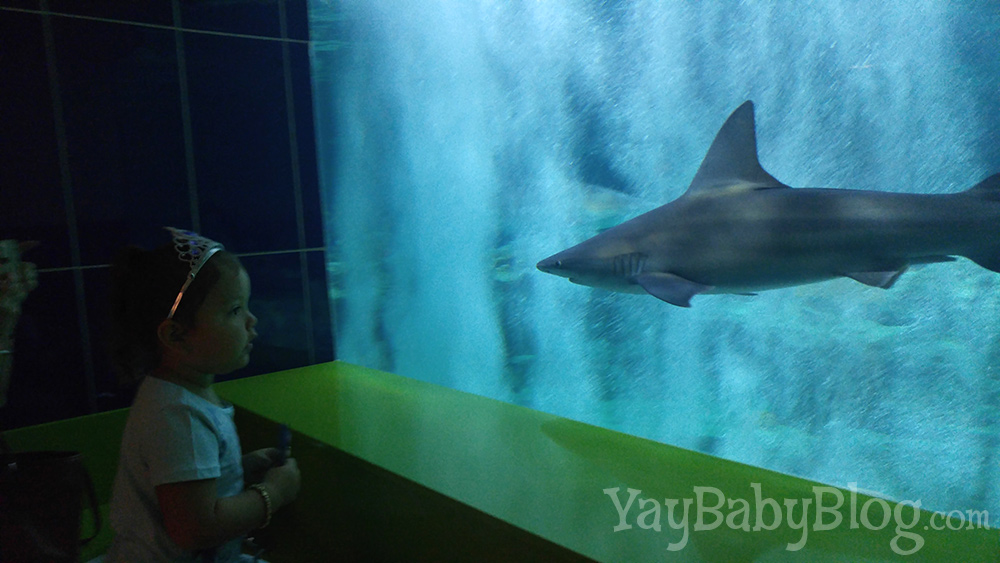 OdySea has more than 50 exhibits, over 30,000 animals and 500 species! A few of our favorites included the Otter Banks, home to the aquarium’s adorable aquatic mammals. Jax loved seeing the otters endlessly play, diving in and out of their pool, chasing each other. Their energy reminded me of Jacquelyn’s, non-stop and fun-loving. The dapper penguins of Penguin Point were also a sight to see! 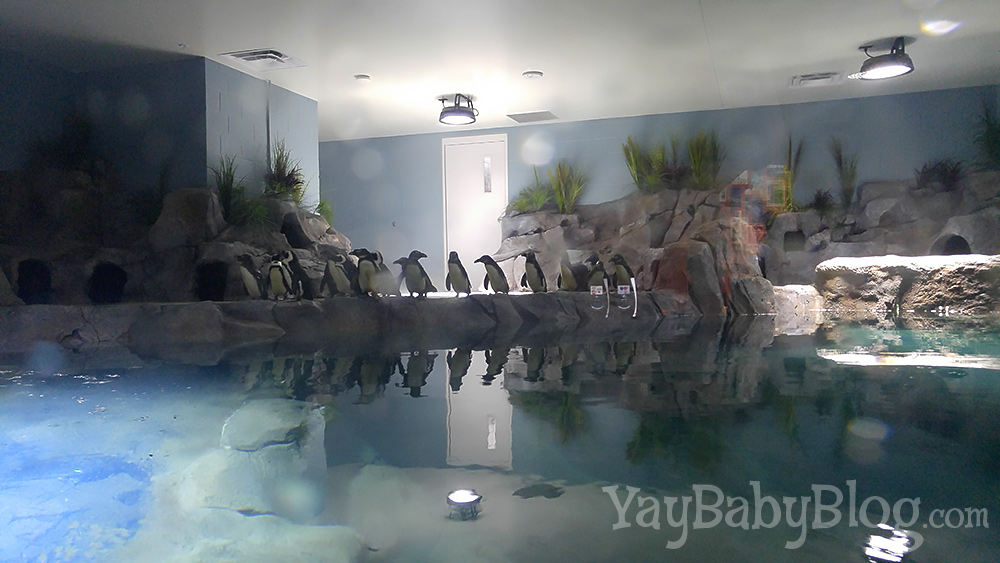 Jax refused to dip her hands in the cold water of the Tide Touch Pool, but she got a kick out of seeing me cringe at the feel of the squishy bodies of the sea cucumbers and the roughness of the star fish.

I was hypnotized by the ethereal tranquility of the blue jelly fish, swaying about in the large tubular tank. 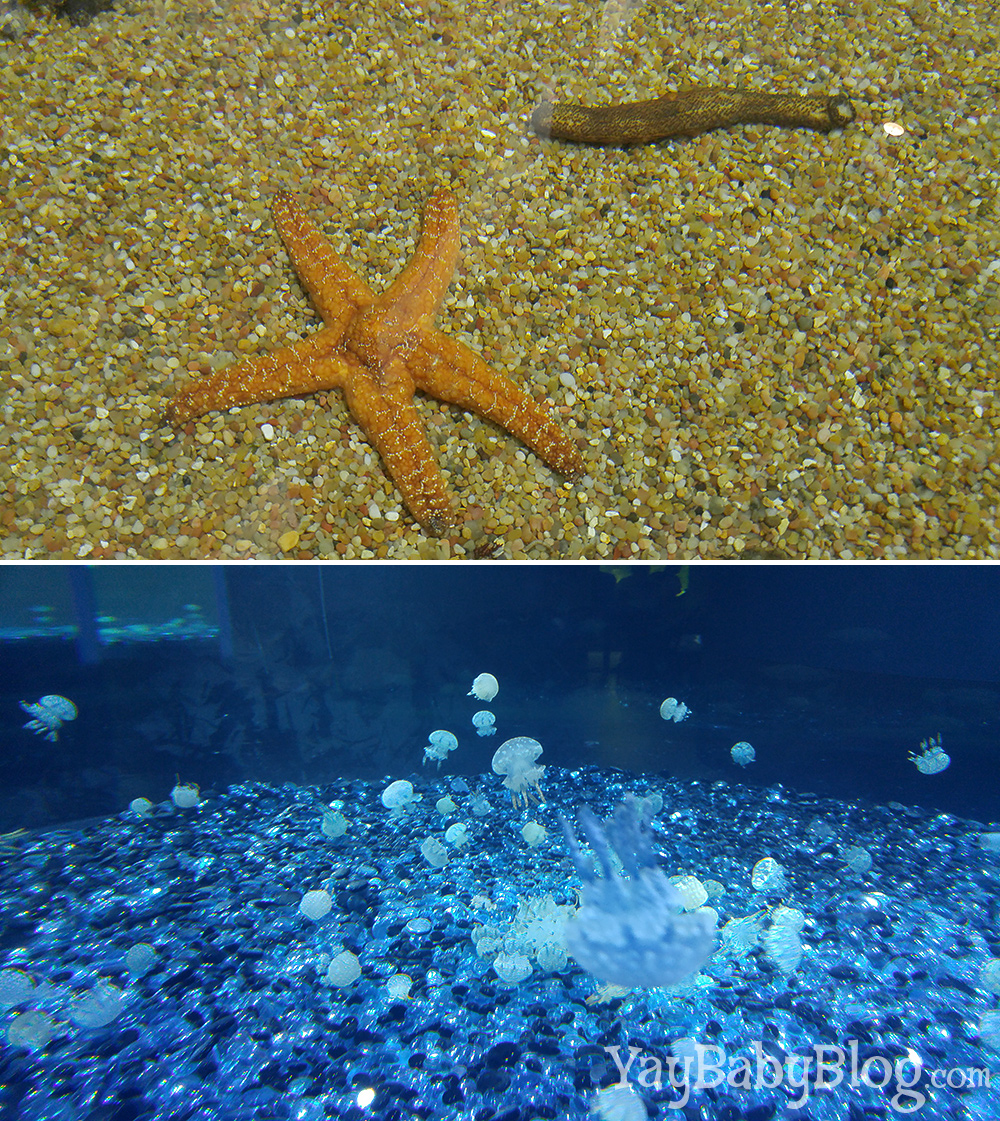 Jax found Nemo and schools of other fish too. 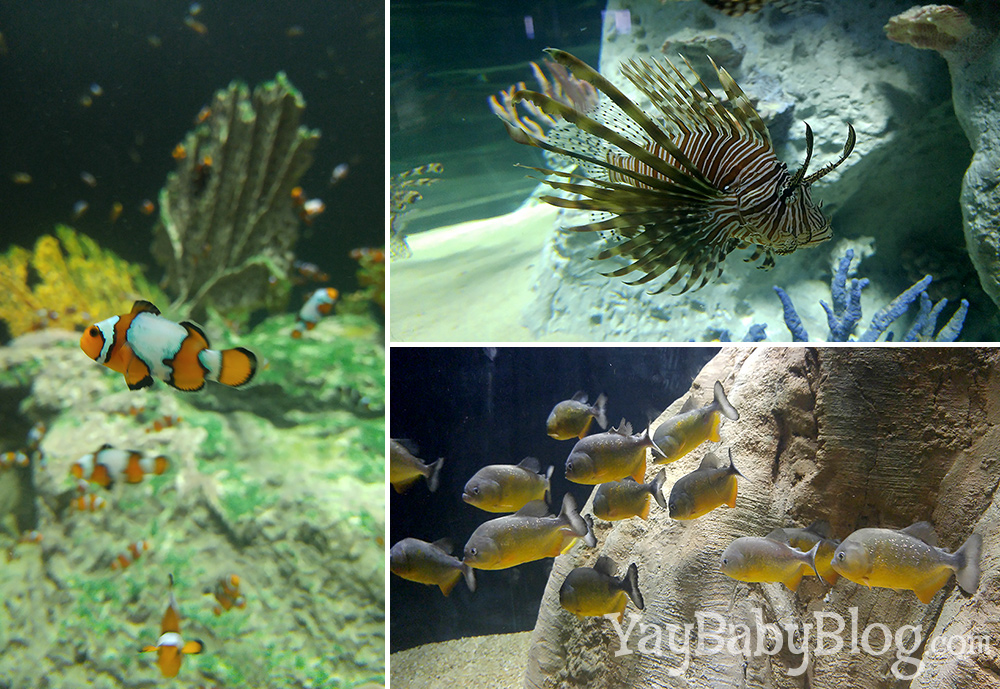 The seahorses had her smiling! 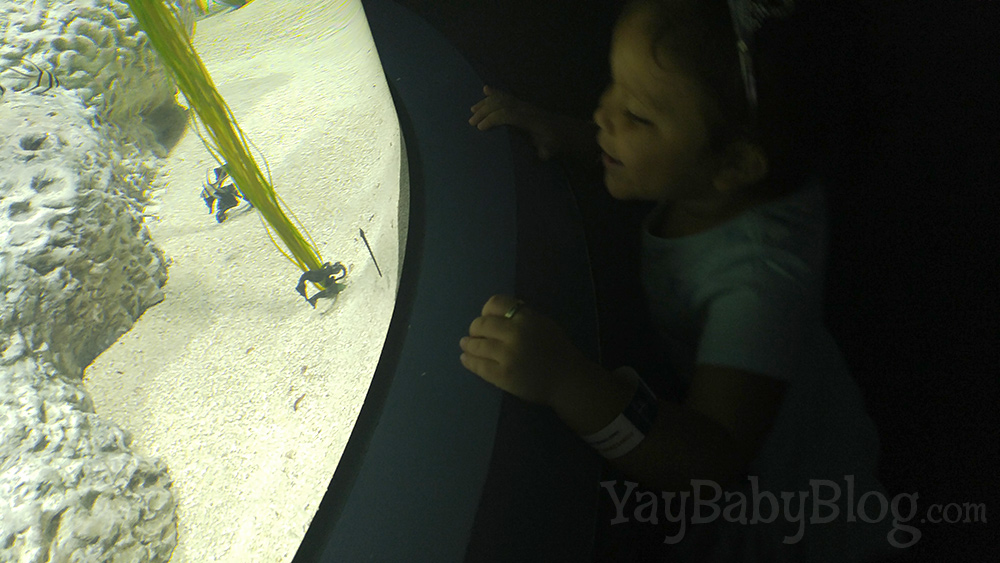 But the turtles seemed to make her a little mad. Haha. 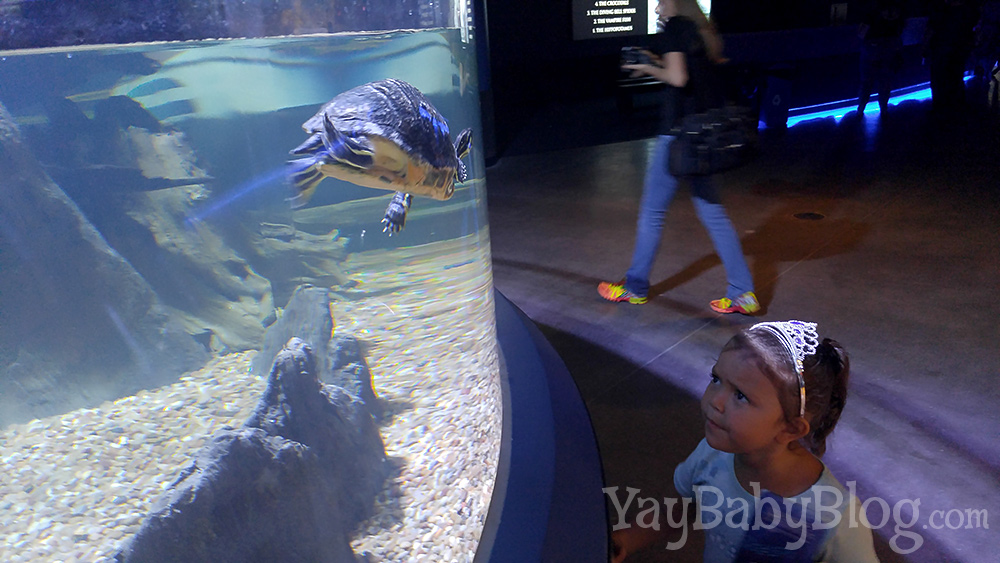 The Escalator to the Deep, the first of it’s kind, is an awesome feature. The photo I took doesn’t do it justice. Just imagine descending slowly into the abyss of the ocean, surrounded my all species, colors, sizes and shapes of sea creatures. I am always nervous taking my daughter on escalators but this one was a true adventure and we had to go up three more times just so we could go back down. 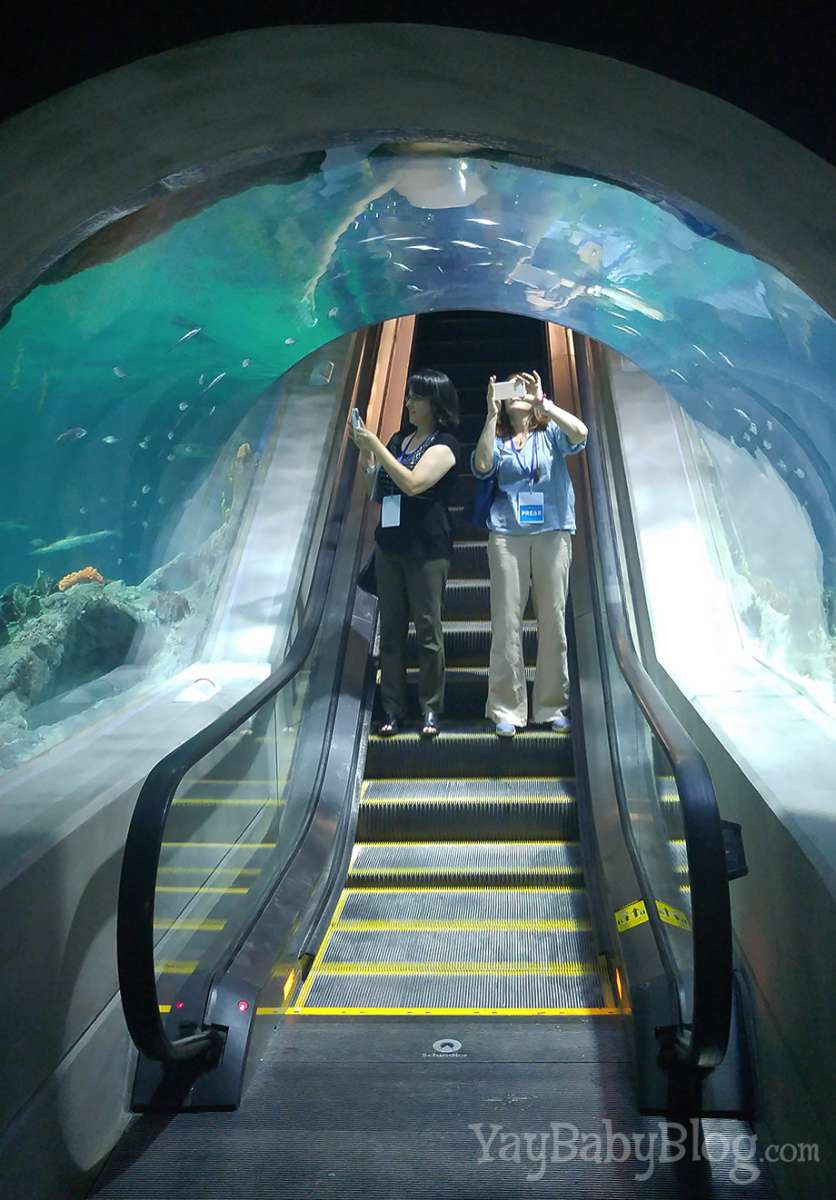 Downstairs in the depths of the aquarium is the 3D theater with seating for 200! The 10 minute, educational film, “Underwater Giants,” was produced exclusively for OdySea and features the ocean’s largest animals, humpback whales, whale sharks and more. Once the film is over the screen goes up exposing yet another view into a tank teeming with the brilliance of ocean life.

The movie plays every about every 15 minutes and while guests wait there are plenty of other things nearby to see. Like these creepy crabs. 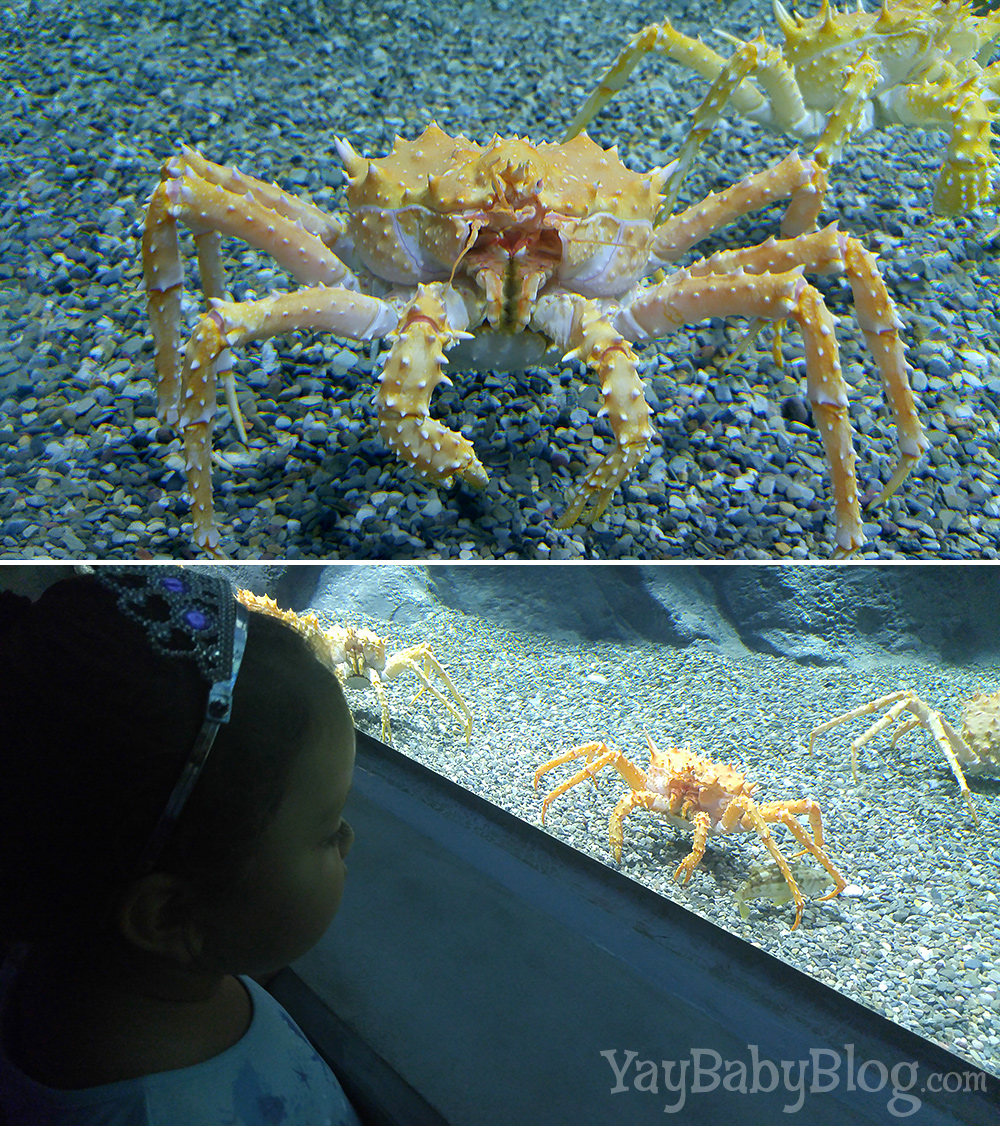 Also located below deck is the Living Sea Carousel. Called an engineering marvel, the carousel, like the Escalator to the Deep, is also the first of it’s kind. Visitors take a seat in what seems to be an auditorium and are whisked away on a 20 minute “ride” around the aquarium, stopping at different exhibits and learning about the animals in each one, such as sea turtles, sea lions, and sharks. 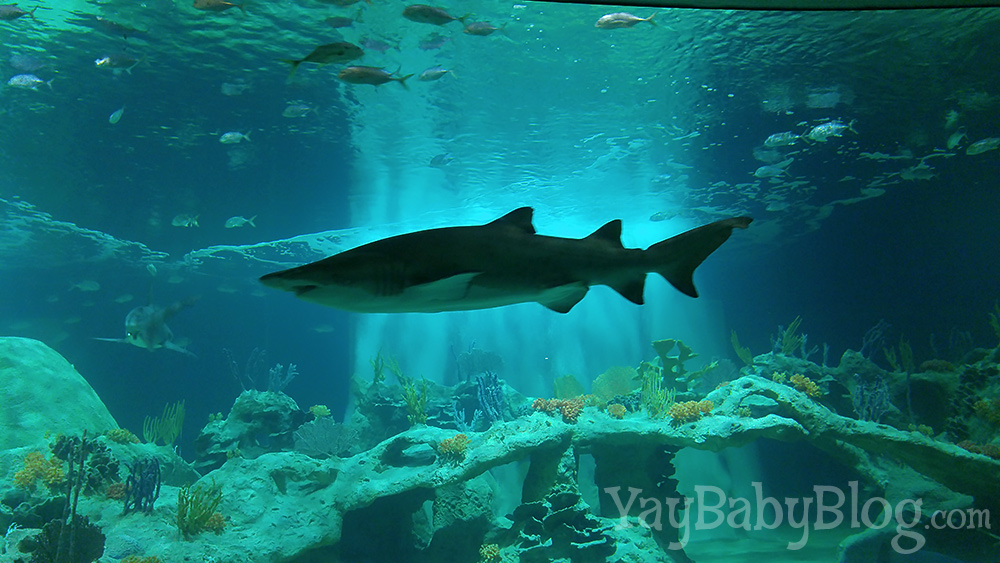 I haven’t even scratched the surface of what OdySea Aquarium offers and what’s to come. I didn’t mention the grace and beauty of the rays in Sting Ray Bay or the wow factor of SeaTREK (which, I am dying to experience). You’ll just have to head over and check it out for yourself, no words I write or pictures I post could convey the magnificence of the place. Seeing my little girl, run around in excitement, floating from one exhibit to the next, alternating between yelps of excitement or silent and speechless in awe was truly priceless.

The OdySea Aquarium is located at: 9500 East Vía de Ventura, Scottsdale, AZ 85256
Hours of Operation: Sunday-Friday 9am-6pm and Saturday 9am-9pm.
Visit www.odyseaaquarium.com for more information and to plan your visit. 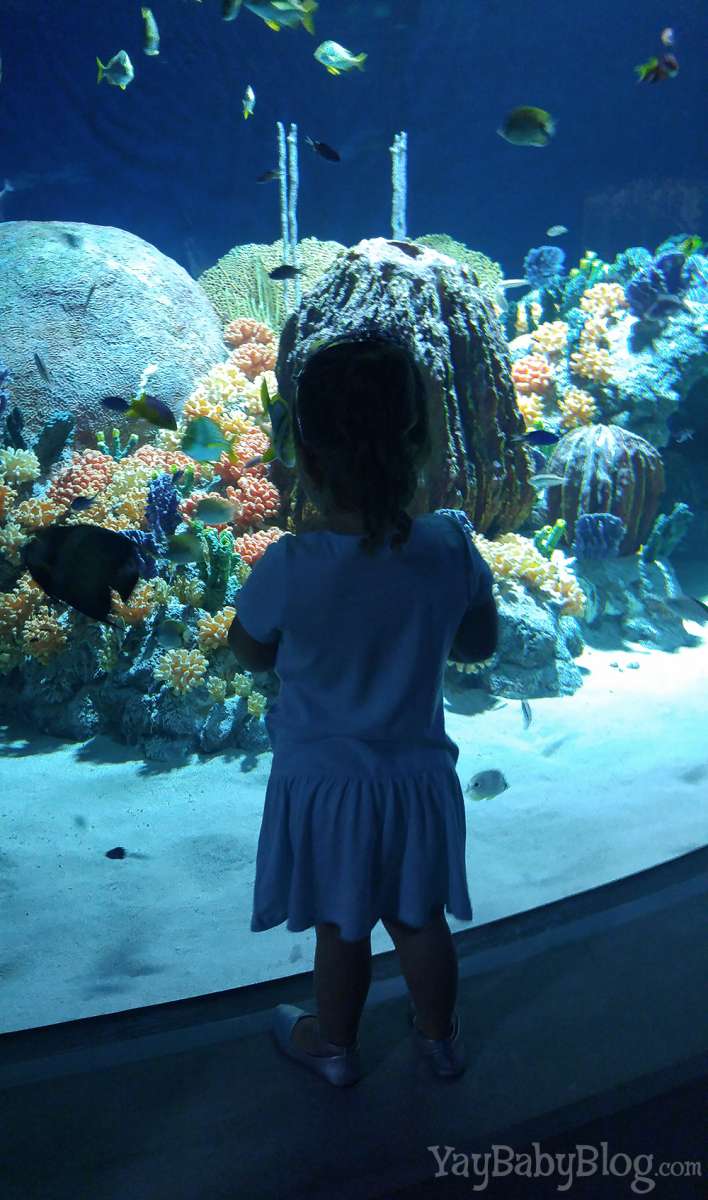 Disclaimer: We experienced OdySea Aquarium free of charge as part of a media visit, however all opinions stated here are entirely my own.